Blog Tour + Giveaway: Review- MADE FOR YOU by VI KEELAND 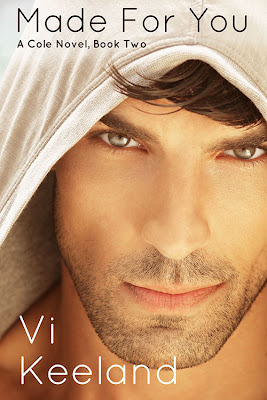 Jack and Syd spent a week in paradise. It was only supposed to be a fling. But life can be funny sometimes, and circumstances brought them back together again. Together they seemed to have found their happy ever after. But when Sydney is offered a chance at the career she has always wanted, she must leave Jack behind to follow her dreams. Can their love survive long distance? Sydney’s touring with a man every woman wants, but he only has eyes for Syd. And an unexpected tragedy leaves Jack feeling remorseful. Can the two find a way through to forever? 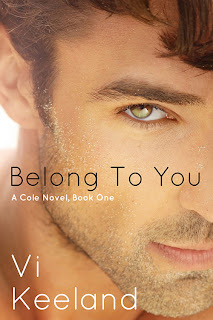 Book description:
My honeymoon was almost everything I dreamed it would be, a tropical paradise, turquoise water, romantic walks on the beach, and loads and loads of mind shattering sex. The only thing missing was the groom.

After seven years of coasting through a relationship with Michael, my senses were numb. A week of passion with a stranger was just what I needed to clear my head and take back control of my life. But how do you move on when the man that was only supposed to be a fling somehow seeps into your soul and steals your heart?

About The Author
Vi Keeland is a native New Yorker with six uniquely insane siblings. She has three children of her own that occupy most of her free time, which she complains about often, but wouldn't change for the world. She is a bookworm and has been known to read her kindle at stop lights, while styling her hair, cleaning, walking, during sporting events, and frequently while pretending to work.

She is a boring attorney by day, and an exciting smut author by night! After years of thinking about writing her own book, she finally took the leap in 2012. Her most recent book, Belong to You, was published in April 2013 and hit number 8 in the Amazon Erotica Best Seller's list in its first five days! The sequel to Belong to You, Made for You, is due out on July 1st, 2013.

(*I received copies of both Cole books by the tour organizer. I'm not a paid reviewer and these thought are my own*)

Belong To You Review:
Holy Heck! Where do I start this review off at? This was the best kind of squirm in your seat make sure no one is watching kind of books ( so was book 2)

I loved how this book starts off with Sydney on her Honeymoon in Hawaii but there was one thing missing...her groom. She took her honeymoon trip with her best friend and they start to party hard. This is when she meets Jack. *sigh* Now Jack is a Sexy, Hot, Sex God! Oh my for real..Him and Syd made a deal that they would only be allowed to ask very few personal question so they can make the week together all about mind blowing sex. As the week goes by feelings rise and by the end they weren't wanting to part each other.

All in all I really loved Belong To You. I could NOT put it down. Right when I finished Belong To You I immediately picked up Made For You. I would recommend this book to any Adult reader who loves hot hot steamy scene, Hawaii, and love a good story line.

Made For You Review:
Now on to the review for Made For You. Vi Keeland strikes again! This was another wonderful, steamy, sexy, sizzling read that had me squirming in my seat in a good way.

In this one we have a wonderful array of wonderful scenes that had my heart racing, melting, and slowly beating all at the same time. In this story Sydney is finally living the dream on being a singer. With Jack being Jack you can't help but love this read. Jack is protective, loving, and caring towards Sydney and will do anything for her.

I ABSOLUTELY loved the ending in Made For You. It was so heart touching. So Sweet to see what happens to the characters in the story five years down the road. All in all this was a shoot for the stars out of this world wonderful read. I would recommend it to any Adult reader who loves Romance, Hot Steamy Sex, and a little bit of drama. MUST READ ( Both books in the Cole series) Pick them up and read them you wont regret it!! 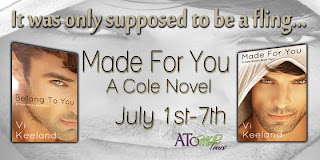 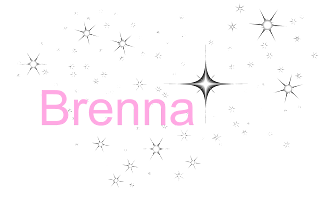